Times have moved on and the Summer (Ha) is almost over.

Upgradeitus has started. The car may be orange but it is still small, low to the ground and I want to be as visible as possible so I decided I wanted some daytime running lights (DRL) plus I noticed that there is no easy means of flashing the head lights so have tackled those issues, plus with so little protection I felt nervous leaving it anywhere so have fitted an immobiliser. 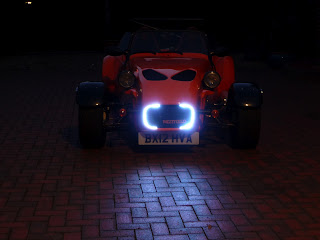 Deciding how to and where to fit DRLs took some thought, looking at what was available on eBay and other supplier. I finally spotted some flexible strips that were inexpensive and could be trimmed to length (£1.99 a length) I had initially thought about trying to fit them to the indicators in some fashion but when I actually had them in hand decided to fit them on the inner edge of the nose cone. Rather than just wiring them in I got a specific relay to control them, it dims them when the main head lights are on.
I think they are quite effective and have had some positive comments. 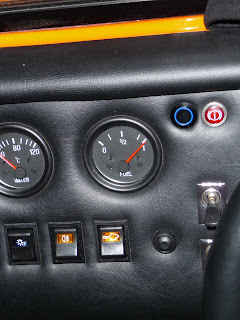 Tackling the lack of a headlight flasher turned out to be a straight forward task, I decided that I would use the button that currently works the heated screen, it is the momentary connection type and I is located on the dash in a suitable place.

I found that Maplin sold momentary connection switches with a built in light, it was therefore not too difficult to replace the headed screen indicator light with the combined switch and light and re wire the original switch to flash the headlights.

I tackled the DRL, headlight flashing and immobilizer in one job while the dash was removed. It took a little longer than expected but I wanted to make sure that I routed cable carefully and selected the most appropriate places to modify or attach to the current wiring.

While away on holiday I managed to get the rear wheel arch removed and returned to Westfield so that the flaw that was present from the beginning could be rectified, it's now all sorted and the arch looks like it should.

The mileages is now above 1000 (more than halfway to being run in) so I have completed its second oil change, this time also changing the filter, it was not too difficult, though getting at the filter is not that easy as is very tight. I think I need a different type of tool though, I purchased one that uses a chain but being so tight with very little clearance above made it difficult, I think one of the other types will be better.

I have also managed to do a couple of longer runs, Oli and I went up to the Donington Kit Car show, the default route would have been almost all dual carriageway and motorway, I decided to steer clear of the motorway but still ended up on the A42, It was OK on this type of road but not its best environment, it was a generally good day and gave me a chance to look at more Westfields and buy some bits for more upgrades. We did just over 100 miles and it was all fine.

As the weather has been so nice this week we decided to go along to the Mid Wales and Shropshire area meet, I had spotted it on the calendar and could see that it was not to much further than one of the regular routes I take. It was a thoroughly enjoyable evening, we had not arrived long when the decision was made to go for a drive so we tagged along driving on some great roads. One issue though, we all managed to hit a small animal (we think a rabbit) trouble was it took my number plate off the front, I knew it was only a matter of time. (Sticky one now ordered to go on the nose cone). We did in the region of 120 miles in total and as I had also done a little running about since filling up the fuel gauge is reading very empty.

I will try and get some use out of the car in the next few days while the weather holds, hopefully visiting the sprint series this weekend then it will be time for more little upgrades, I think I enjoy the practical side as much as the driving, perhaps once it's run in and I can do some track days it may be different.

Posted by Rhett Turner at 05:05 No comments:


I haven't managed to get out in it much weather has been very poor indeed. Have been able to do a little work on it though. The carbon wrap on the mirrors started to look tatty almost immediately. I have purchased some proper 3M carbon wrap and also some 3M bonding solution. The new wrap is much better it feels thicker and hopefully it together with using the bonding agent should mean a better result that wont start to bubble and peal as soon as it sees the sun.


I did go to work in it for the first time the other evening. I needed to do some work in the office later in the evening so knew the roads would be quiet, it had been a nice day and was still warm with no threat of rain until the early hours so decided to give it a run.
A cross city commute is not what it is best suited to, there are quite a few section of road with the speed bumps that allow you straddle them with a wheel on each side, great in my Focus but not so with the Westfield. Approached each batch very cautiously as they are all slightly different. Over almost all of them there was no issue but I did ground it a couple of time, very unnerving.
It also allowed me to see just how poor the lights are, I have ordered some HID conversions and while I'm at it some day time running lights. Once they're fitted I'll take it for another run in the dark so I can set them up for the best light coverage and spread.
Posted by Rhett Turner at 04:41 No comments: